Heseltine: the depths to which a failed politician will stoop!

Heseltine, it is really remarkable, even by the standards of Michael Heseltine, the depths a failed politician will go to try and save a failing enterprise

Because there is every chance that VOTE LEAVE will win but to go on television and talk about Boris Johnson as if he is somewhat deranged and a sad person unable to cope with the stress of the campaign in the way that he did is at best desperate and at worst rather nasty! 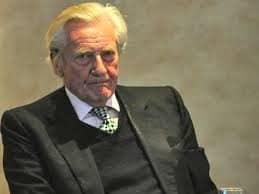 Heseltine then has the brass cheek to say he can’t understand the disloyalty of Cabinet Ministers towards our Prime Minister David Cameron well if you call a referendum knowing that the views a split within the cabinet and strongly held on both side you just have to allow ministers to follow there own beliefs.

Some Ministers have not followed there own beliefs, they have put career before country but either way you have to respect anyone who puts the fate of there country before career.

If you also put into the mix that Cameron, in his ‘renegotiation’ had not even asked for what he said he would ask for in his 2015 manifesto, the ‘renegotiation’ was a sham, if he had followed his own manifesto he wouldn’t have got any of it and would have had to lead the leave campaign!

If Cameron had been true to his 2015 manifesto he would have got total loyalty but he didn’t, he asked for nothing and got 1/3 of sweet diddly squat, while we are on the subject there has never been a more disloyal Cabinet Minister than Michael Heseltine, he was plotting against Margaret Thatcher from the day she was elected leader until the day she left Downing Street!

Heseltine has since written to Michael Gove questioning his thinking process in similar vane and this has bee followed by attacks from John Major and Chris Patten, all of course from the wing of the Conservative Party which nearly destroyed it in the mid 1990s.

The tone of this debate has been set by the remain side who have no arguments just scare stories and the damage to the British economy due entirely to these scare stories are the responsibility of the remain camp, watch the videos below and then make your mind up.

Whatever formula you use it still amounts to a lot of money with ever more power shifting to Brussels-VOTE to LEAVE! https://t.co/rjIJbVn3RG

Watch this Heseltine video, it is a classic case of ‘if you can’t win the argument take the man

Brexit the Movie, glass of wine, feet up and be prepared to learn the truth

Be the first to comment below, have YOUR say, it is YOUR FUTURE!

On June 23rd 2016 the UK votes to choose whether to be an independant nation or a province of the failing EU, we must not let the EU drag us down with them!

The whole of the mainland EU is a potential Basket case