Theresa May, where has she gone wrong, if in fact she has?

Theresa May and her Conservative Party started this general election campaign with 20%+ lead in the polls, this has now, apparently, dropped to between 9 and 1 percentage points and now we find ourselves on election night with the exit polls predicting a no overall majority, as well as being a disaster for the Conservative Party this result would be terminal for Theresa May. 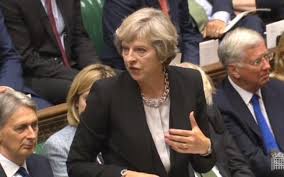 Firstly, was it right to call the election and the answer is unquestionably yes, because every other party leader had beed goading her that she didn’t have a proper mandate, there was a definite move by the Lib Dem’s and the SNP to frustate Brexit and reverse the referendum decision, many policies such as grammar schools would have been in trouble with her small majority, the Conservatives had already failed to get their budget passed finally Theresa May needed a solid majority to give her the real authority to negotiate Brexit.

Theresa May has made several mistakes during her short time as Prime Minister, though it must be said that on Brexit she has been rock solid and can provide an exciting outcome for our country, the mistakes and faultering in question could have made the difference between success and failure in this election and as I see them the mistakes are, :

We will not know until the morning whether or not Theresa May has blown it because, believe me, the majority she wanted was achievable and if we haven’t achieved it the blame will lie firmly with Theresa May, she will have essentially lost the election all on her own because she ran a very presidential election for which she is not suited!

Also if those exit polls are proven correct, Theresa May could have put the country, its future and its prosperity in grave danger from a Corbyn government, the thought of which is terrifying, if the exit polls are correct it will also make Theresa May’s position untenable.

Another point, which we will cover later is how, what is the biggest con on the British electorate in history, namely the Remain invention of a hard and soft Brexit, which don’t actually exit develops over the coming months!